The importance of wellbeing in the modern workplace

Employee wellbeing is that part of an employee’s happiness and health that is influenced by their work and includes the company’s culture and environment as well as people’s physical and psychological health.

Whereas employee wellbeing schemes were traditionally seen by Employers as a ‘nice to have’ optional extra, they are increasingly being recognised as a key driver of engagement and financial performance.

There is a growing awareness of the impact wellbeing can have on individuals and businesses, but also on the wider economy and society. According to Employee Wellbeing Research 2017 published by the Reward & Employee Benefits Association, over half of companies do not have a wellbeing strategy in place. However, virtually all of these organisations are planning to implement one.

The investment community is also increasingly using employee wellbeing as an indicator of financial performance and market value, as a growing body of research shows the organisations with effective wellbeing strategies generally outperform the market.

In recent years, the UK government has introduced several initiatives in an attempt to tackle the impact of poor working environments on employee’s lives and the effect on the economy of sick leave and payments. These include guidelines from the National Institute for Health and Care Excellence on improving employees’ health and wellbeing and the introduction of the National Wellbeing Survey to measure the population’s happiness.

So why all the focus on employees’ wellbeing?

Well, according to research from PricewaterhouseCoopers, wellness programmes can have some significant benefits for companies: 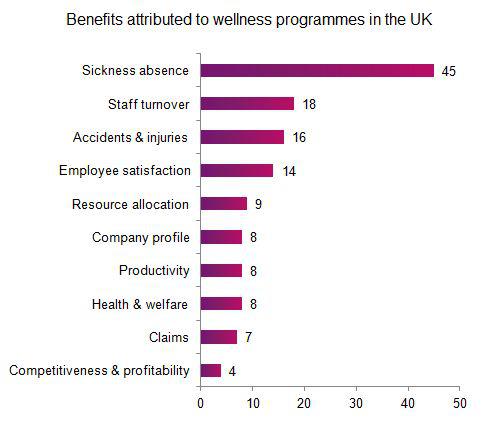 Employee wellbeing schemes are proven to help keep your staff in better health, which is a huge benefit to UK organisations. VitalityHealth recently commissioned research on Britain’s Healthiest Workplace and found that poor health is costing the UK economy up to £57 billion a year, either through employees missing work or presenteeism (when employees are at work but not productive).

Even more concerning is the fact that the general health of the UK workforces appears to be deteriorating – the average number of working days lost per employee has risen from 23 to 30 over the last four years.

While most Employers tend to traditionally focus on the physical wellbeing of their employees, it is mental health which has the biggest impact: 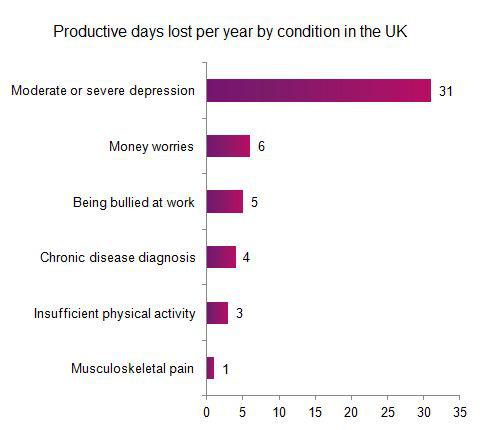 It has long been recognised that employees who feel cared for by their company are likely to be more productive and engaged, which in turn makes them more loyal. Reducing staff turnover helps businesses to retain the experience their employees have built up, as well as reducing costs from drops in productivity when employees leave and the costs of recruiting new members of staff.

Introducing employee wellbeing initiatives can also positively impact recruitment. One of the key categories in the Sunday Times Best 100 Companies to Work For list is wellbeing. New employees, particularly Millennials, want to work for companies who care about their employees and about society. And in a period of skills shortages and low unemployment, when many organisations are struggling to attract the best talent, having a superior wellbeing programme can really help to boost your Employer brand and make you stand out from the competition.

Here are a couple of tools that can help you calculate the cost of poor employee health on your company and create a business case for introducing wellbeing measures.

from the Department for Work and Pensions

From Work and Well-Being Ltd

Go to Knowledge Centre
About the Author

Kate Allen
Managing Director, Allen Associates
Kate founded Allen Associates in 1998 out of a determination to build a recruitment business which delivered a bespoke service centred on the needs of clients and candidates.